Read What Billy Graham Had to Say to Arkansas

In this month’s Family Council update letter, we take a look at what the Rev. Billy Graham had to say to Arkansas when he came to Little Rock in 1989.

END_OF_DOCUMENT_TOKEN_TO_BE_REPLACED

Family Council Saddened at the Passing of Billy Graham 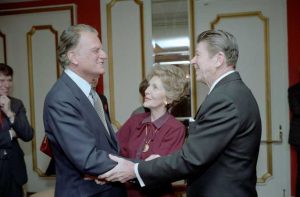 Little Rock, Ark. – On Wednesday, the Reverend Billy Graham passed away. Family Council President Jerry Cox released a statement, saying, “We are deeply saddened at the passing of Reverend Billy Graham. He was one of the most respected Christian leaders in the world. I had the opportunity to attend one of his revival meetings at War Memorial Stadium in Little Rock in the late 1980’s. No one knows how many lives he touched.”

Cox said part of what set Billy Graham apart was his care for elected officials. “I’ve always admired the way Billy Graham could minister to everyday people and presidents alike. He believed our elected leaders needed God’s wisdom and our prayers. That’s something I really appreciate.”

Cox said Billy Graham was like no one else. “Maybe once in a lifetime a person steps onto the stage, and they make such an impact that no one can take their place. Billy Graham was such a person—a man without peer who simply loved God and followed Him as best he could.”

END_OF_DOCUMENT_TOKEN_TO_BE_REPLACED

Today is Rev. Billy Graham’s 99th birthday. Watch this video he and the Billy Graham Evangelistic Association have released about his life and legacy:

Click here to learn more about the ways in which you and others can celebrate Rev. Graham’s lasting impact on your own life.