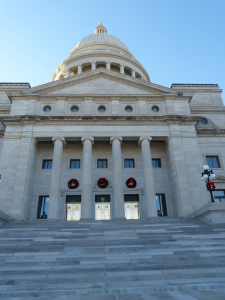 As Election Day approaches, we thought it would be a good idea to type up a simple primer of what each election is and what it does. Whether you’re a student who is just learning about elections or an adult who missed some of the finer nuances of self-government in civics class, we hope you will find this brief primer helpful in understanding what is going on this year.

Candidates file for office during the spring of each election year. Primaries, or “Preferential Primary Elections,” are held in May to allow political parties to select a nominee for elections in the fall. In Arkansas, the only parties who hold primary elections typically are the Democratic and Republican parties.

If elections were a basketball tournament, the May primaries would be the first round. Candidates square off with members of their own parties to determine who gets to advance to the next round of elections. For instance, if three different Republicans each wanted to be Governor, they would first run against each other in a May primary election. The winner of the primary would then go on to run for Governor in November against candidates from other parties.

If you are a Democrat, you can be given a Democratic ballot on Primary Election Day, and you can vote for the Democratic candidates you would like to see run for office in November. There will not be any Republican candidates on your ballot, because you are not participating in the Republican primary.

Runoffs typically occur following a primary election. The winner of the runoff election following a May primary advances to the next round: The General Election in November.

General Elections are the main event of the election year. The General Election is the final vote in which candidates win or lose their races for office.

A Word About Third-Party Candidates and Independents

Even though the two biggest parties in Arkansas are the Democratic and Republican parties, there are others, including the Libertarian and Green parties; there are also candidates who are independent of any political party.

If an elected official passes away, resigns, or is removed from office for some reason, a special election may be called to fill that official’s vacant office. Special elections can be held in odd-number years.

The local government–such as a county’s quorum court–can also hold special elections to vote on tax increases and other local issues, if necessary.

At the November General Election, voters are often asked to weigh in on legislation and amendments to the Arkansas Constitution.

The Arkansas Legislature can refer up to three measures to voters per election. These measures are often things like changes to state tax laws or amendments the legislature believes need to be made to the Arkansas Constitution.

Additionally, citizens can, through what is called the Initiative and Referendum Process, collect petition signatures to place a law or amendment on the ballot. This was done in 2012, with the medical marijuana measure; 2008, with the Arkansas Adoption and Foster Care Act as well as with the Arkansas Lottery Amendment; and in 2004, with the Arkansas Marriage Amendment.

Voting on ballot issues allows the voters to act as a lawmaking body, deciding for themselves whether or not something should be law.

The process by which elected officials are chosen by the voters is a long one that is often misunderstood. Voters sometimes confuse the May primary elections with the November General Election, or fail to understand why we have so many elections in the first place. The process, however, allows voters to start with a large pool of candidates for office, narrowing their choices down until only one person is chosen. It’s a valuable process that, ideally, helps citizens choose the very best and most qualified people to govern.