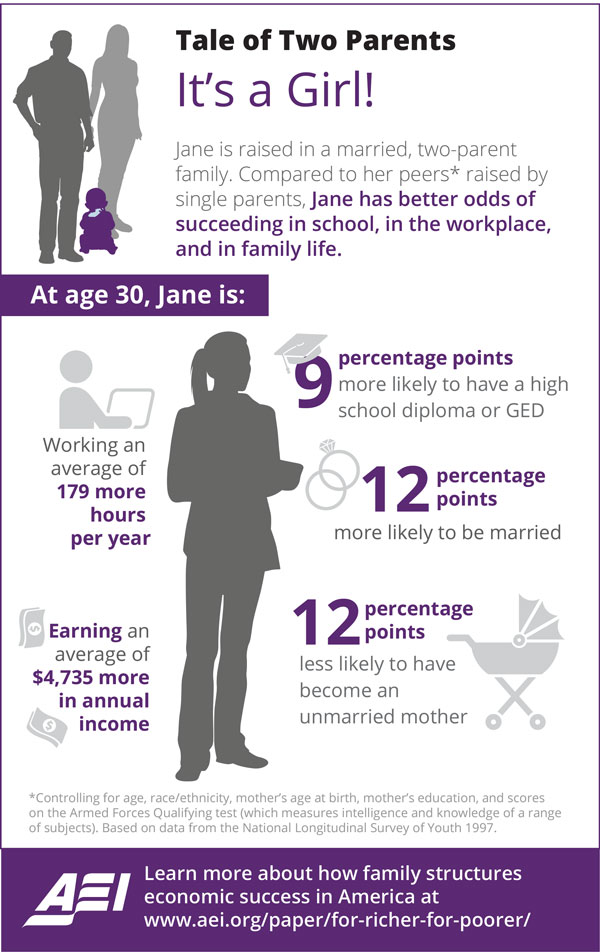 We have written before about research revealing how marriage contributes to household income. Studies from the Heritage Foundation have shown marriage is as effective at raising household income as adding a few years to a person’s education. In other words, being married with a college degree puts a person’s income in the same range as that of someone with, for example, some graduate school education or a Master’s degree. This week there is more emerging evidence that marriage is good for parents and children.

According to a new study by officials from the National Marriage Project, “Growing up with both parents (in an intact family) is strongly associated with more education, work, and income among today’s young men and women. Young men and women from intact families enjoy an annual ‘intact-family premium’ that amounts to $6,500 and $4,700, respectively, over the incomes of their peers from single-parent families.”

If those numbers hold true, that means a young adult who grew up in an intact family with a mother and father present will earn roughly $200,000 – $290,000 more over the course of his or her career than someone who grew up in a single-parent household.

Advocates of higher education often say that people with college degrees earn, on average, $1 million more over the course of their lifetimes than people who do not go to college. And while many argue that number is inflated, there is little doubt that going to college usually has a positive impact on a person’s salary.

A college degree can raise your lifetime income by hundreds of thousands of dollars, at the very least. So can growing up with a married mother and father. Just like a good education, a good marriage does not simply raise a family’s income in the short-run. It also raises a child’s income in the long-run as he or she grows up and enters the workforce.

Marriage is about a lot more than income levels and dollar signs, but at a time when so many people are discussing wage gaps and the economy, it’s worth remembering what we have said before: A healthy marriage is one of the unsung heroes in the fight against poverty.

Love, Marriage, and the Baby Carriage