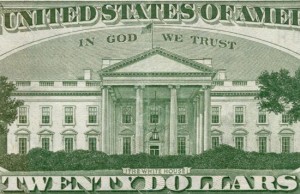 “In God We Trust” has been the official motto of the United States of America for almost 60 years. It has appeared on many coins minted by the U.S. government since 1864.

However, the Freedom From Religion Foundation, based in Wisconsin, has threatened to sue law enforcement agencies in Arkansas if they do not remove the phrase “In God We Trust” from their police cruisers.

The organization sent letters to the Cave City Police Department and the Hempstead County sheriff’s office after both placed the saying on their patrol vehicles. The foundation’s co-president says she intends to sue if the phrase isn’t removed, but didn’t give further details.

The Cave City mayor says he has seen the letter but has yet to make a decision on whether to strip the message from the city’s police cars. The Hempstead County sheriff he says he won’t remove the logo despite the foundation’s letter.

“In God We Trust” was adopted as the official motto of the United States in 1956, but its history dates all the way back to the American Civil War. Then Secretary of the Treasury Salmon P. Chase urged the U.S. mint in Philadelphia to begin minting coins with a motto honoring God, saying,

No nation can be strong except in the strength of God, or safe except in His defense. The trust of our people in God should be declared on our national coins.

You will cause a device to be prepared without unnecessary delay with a motto expressing in the fewest and tersest words possible this national recognition.

Groups have tried unsuccessfully to have “In God We Trust” stricken from our money and our monuments. If it’s alright to stamp those words on our nickels and dimes, then there ought to be nothing wrong with putting it on patrol cars as well.