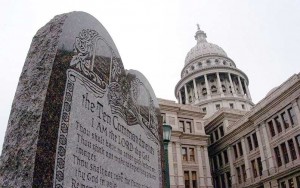 Recently we wrote how the City of El Dorado wasn’t yielding to atheist groups who oppose the city’s 40 Days of Prayer campaigns.

This week Americans United for Separation of Church and State took to the Internet, complaining El Dorado “went ahead with a planned ’40 Days of Prayer’ event in October despite a warning from Americans United.”

Hats off to everyone in El Dorado for exercising their religious liberties and refusing to yield to these groups from out of state! Public prayer is a longstanding tradition in this country, as are calls to prayer from public officials.

Meanwhile, a Nativity scene in Michigan has been relocated from a public park to a church’s property following complaints from the atheist group Freedom From Religion Foundation. FFRF has worked since 2007 to get the Nativity scene removed from public property in Menominee, MI–even though the Nativity scene is a longstanding tradition in that town.

As we have written numerous times, public officials and local governments can celebrate Christmas, and the U.S. Supreme Court has ruled those celebrations can include Nativity displays and similar decorations. Nativity scenes do not have to be placed on private property to be constitutional. They can appear on public property without violating the First Amendment.