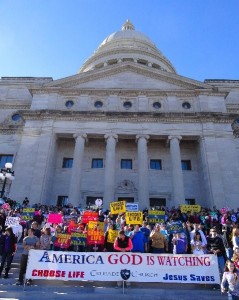 Earlier this year the Arkansas Legislature passed The Woman’s Right to Know Act, Act 1086 of 2015.

The law amends Arkansas’ rules for informed-consent prior to an abortion. It replaces the Woman’s Right to Know Act of 2001; under the 2001 law, women had to be provided with information about abortion prior to the procedure, but the information did not necessarily have to be given in person or in a private, one-on-one setting with the woman. The 2001 law also did not include vital information–such as information on new, cutting-edge science on chemical abortion reversal.

The new law helps ensure a woman seeking an abortion will be given details on abortion, its risks, and its alternatives in a private setting, where she can ask questions and get answers.

It also requires the doctor to wait 48 hours before performing the abortion–giving the woman time to consider all the information and explore all her options.

After speaking with experts on pro-life laws, it appears Arkansas’ informed-consent law may be the strongest in the nation.

The only state we know with a law as exhaustive and modern as Arkansas’ is Arizona. Arizona also passed their new informed-consent law this year. Unlike Arkansas, however, Arizona requires the doctor performing the abortion to wait 24 hours–half the time of Arkansas’ law.

If you want to compare the two laws for yourself, you can find Arizona’s law here and Arkansas’ law here.

Among other things, Arkansas’ new informed-consent law requires a woman seeking an abortion be told:

Over the years, many post-abortive women have testified that had they known everything about abortion and its consequences, they would have made a different choice. This law ensures women have as much information as possible–including information on abortion alternatives, which has the potential to save unborn lives.