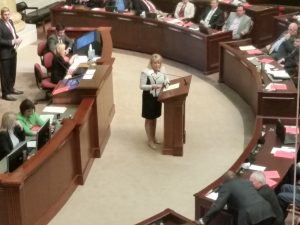 Medical marijuana users, caregivers, and hospitals would still be able to mix marijuana with food or drink at home to aid ingestion, but companies wouldn’t be able to sell dangerous products infused with marijuana.

In other states, marijuana edibles routinely send people–especially children–to the emergency room. These are extremely dangerous products. H.B. 1392 helps keep them out of Arkansas.

The bill needed 67 votes to pass. It received only 52. Below is a breakdown of the vote.

Voted For the Bill (52 Representatives)

Voted Against the Bill (40 Representatives)

Did Not Vote (8 Representatives)