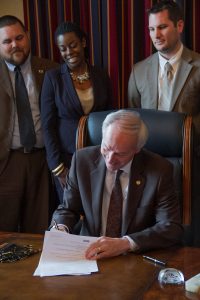 Today Gov. Asa Hutchinson sent a letter to the legislature’s Tax Reform and Relief Task Force expressing his opposition to increases in the grocery tax.

Last week the Tax Reform and Relief Task Force voted to review and discuss a plan to raise the sales tax on groceries to as high as 6%.

Hats off to Gov. Hutchinson for opposing the grocery tax!