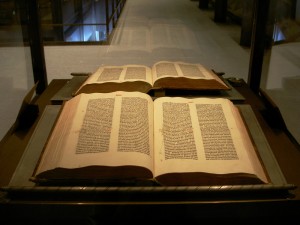 On October 4, 1982, the 97th Congress of the United States passed Senate Joint Resolution 165 (co-sponsored by, among others, Arkansas Senator David Pryor) authorizing then-President Ronald Reagan to declare 1983 “The Year of the Bible.”

The resolution begins by saying, “Whereas the Bible, the Word of God, has made a unique contribution in shaping the United States as a distinctive and blessed nation and people,” and goes on to declare “that renewing our knowledge of and faith in God through Holy Scripture can strengthen us as a nation and a people.”

Thirty-one years later, it’s hard to imagine Congress calling the Bible “the Word of God,” much less agreeing that an entire year be dedicated to it, but that’s precisely what happened. At the time, Congress knew America was going to be facing what President Reagan dubbed “a decade of enormous challenge.” Their solution wasn’t just to revamp the economy, adjust the military, or try to create jobs. They also gave thought to America’s heart and soul, as evidenced by this resolution.

As Ronald Reagan noted in February of 1983, “of the many influences that have shaped the United States of America into a distinctive Nation and people, none may be said to be more fundamental and enduring than the Bible…its teachings helped form the basis for the Founding Fathers’ abiding belief in the inalienable rights of the individual…”

A similar resolution was offered in Congress in 2009 calling on President Obama to declare another “Year of the Bible,” but the resolution died in committee. Too bad. America is facing many challenges. Perhaps it’s time the 113th Congress of the United States learned from the 97th: That renewing our faith in God can strengthen us as a nation and a people.

Video: How Can the Church Be Involved in the Public Arena

Pictures From Pastors Day at the Capitol