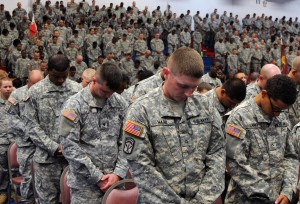 Winter Wingman Day at Little Rock Air Force Day provided classes to develop service members mentally, physically, socially, and spiritually. While attendance at the event was mandatory, members could choose which three of the offered classes they would attend. The spiritual component of the event, in the chapel, was scheduled to include sessions from “The Art of Marriage,” a video conference developed by FamilyLife, a Christian family ministry headquartered in Little Rock.

When at least one airman complained to the chain of command and sent a letter to Mikey Weinstein, founder of Military Religious Freedom Foundation (MRFF), the class was dropped. The group’s website states that “Mikey and MRFF have been actively and aggressively protecting members of the U.S. Military from unconstitutional religious influence . . . the only organization dedicated solely to the protection of the religious freedoms and dignity of ALL members of the U.S. Military.”

It appears, however, that Weinstein’s main goal is to silence Christians whom he calls intolerant, a threat, and “Dominionists”—“fundamentalist Christians whose beliefs, tenets, and practices threaten the separation between church and state embedded in the U.S. Constitution.”

A base spokesman said the program was dropped not because it was produced by an evangelical group, but because they “wanted to make sure it was inclusive of all relationships, to include same-sex relationships.”

This is not the first time the U.S. Air Force has yielded to Mikey Weinstein and his organization. MRFF has been part of a concerted effort to squelch everything from Nativity scenes to personal religious activity by airmen on Air Force bases in recent months. Since the program in question at the Little Rock Air Force Base was one of several electives, there was no reason to cancel “The Art of Marriage.” The base could have expanded the scope of material offered. Giving airmen more options to choose from–not less–would be much more “inclusive.”

As Ronald Reagan noted in 1984, “To know how a church and its members feel on a public issue expands the parameters of debate. It does not narrow the debate; it expands it.” How is turning away a marriage program produced by a Christian organization “inclusive”? Is freedom of religion for everyone but Christians?

FRC Releases List of Threats to Religious Liberty in Military

VA Med Center: Pay No Attention to that Man Behind the Curtain