S.B. 304 by Sen. Will Bond (D – Little Rock) and Rep. LeAnne Burch (D – Monticello) requires every school district in Arkansas to offer “evidence based” health courses to 7th – 12th graders that include instruction on preventing pregnancy and sexually-transmitted diseases through abstinence and contraceptives.

We know from experience that the kind of curriculum S.B. 304 mandates won’t actually teach students to be abstinent. Instead it will encourage students to be sexually active.

In the 1990s Governor Bill Clinton and Dr. Joycelyn Elders promoted these same kinds of sex-education programs in Arkansas. Family Council strongly opposed their programs, because they treated every public school student as if he or she would be promiscuous, and they failed to have a meaningful impact on Arkansas’ teen birth rates and teen abortion rates.

A few years ago, the Obama Administration spent millions of taxpayer dollars on “evidence-based” teen pregnancy prevention efforts nationwide. By and large, the program was unsuccessful; in fact, in some cases, students who went through the pregnancy prevention course were more likely to become pregnant afterward — not less likely.

S.B. 304 is just a continuation of these same flawed programs.

END_OF_DOCUMENT_TOKEN_TO_BE_REPLACED 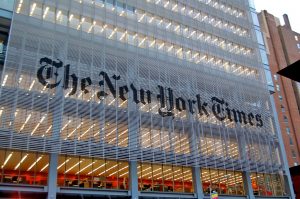 Last weekend The New York Times published an opinion-editorial that managed to cram a remarkable amount of misinformation into a short column.

The editors lamented the federal government’s efforts to promote abstinence-only sex education, calling it “an anti-science agenda” that “defies all common sense,” and writing, “There is no good evidence that abstinence-only education prevents or delays young people from having sex, leads them to have fewer sexual partners or reduces rates of teen pregnancy or sexually transmitted infections. And given that almost all Americans engage in premarital sex, this vision of an abstinent-outside-of-marriage world is simply at odds with reality.”

Our friends at Family Research Council summed it up very well:

Did the Times fire all of its fact-checkers? The CDC blew that myth to bits in 2016, explaining that not only does the abstinence message work — it positively affects every area of kids’ lives. “High school students who are virgins rate significantly and consistently better in nearly all health-related behaviors and measures than their sexually active peers.” That includes everything from “bike helmet and seat belt use to substance abuse, diet, doctor’s visits, exercise, and even tanning bed use.” Abstinence education is like one-stop shopping for healthier behavior.

Among other things, The New York Times editorial criticized the Trump Administration for ending the Obama-era Teen Pregnancy Prevention Program.

As we wrote last year, the Teen Pregnancy Prevention Program began in 2010. Its goal was to provide federal grant money for evidence-based programs designed to prevent teen pregnancy and sexually transmitted diseases.

Unfortunately, these “evidence-based” programs generally did not focus on abstinence. If anything, abstinence got a passing mention while the bulk of the programs focused on contraceptive use.

From 2010 – 2017, organizations — including Planned Parenthood — received federal funds to facilitate these teen pregnancy prevention programs across the U.S.

In some cases students who went through the “evidence-based” pregnancy prevention program actually had higher pregnancy rates than students who did not.

After offering the program over nine months to middle and high school students during or after school, [youth who went through the program] were as likely as youth offered a four-hour alternative program, to report causing a pregnancy or becoming pregnant, having sexual intercourse, or having recent sexual intercourse without an effective method of birth control both immediately following the conclusion of the program, as well as in an assessment occurring 12 months later. . . . Immediately after the program, . . . females reported becoming pregnant at a higher rate than females receiving the alternative program.

In other words, the federal government gave millions of dollars to an abortion provider for a teen pregnancy prevention program that actually increased teen pregnancies. And apparently the editors at The New York Times believe that was a good use of taxpayer funds.

Family Council has supported abstinence education in Arkansas since the 1990’s. We need to address teen pregnancy in America, but handing out federal tax dollars to groups like Planned Parenthood simply is not the way to do it.