Churches have been burned and vandalized in different states amid recent tensions and unrest in the U.S.

END_OF_DOCUMENT_TOKEN_TO_BE_REPLACED 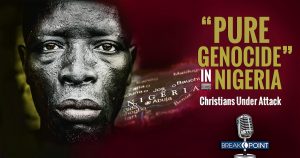 Our friends at the Colson Center for Christian Worldview released a commentary today highlighting the intense persecution Christians face in Nigeria and calling on America to condemn the atrocities committed against thousands of innocent civilians in that country.

By most estimates, the population of Nigeria is almost evenly divided between Muslims and Christians. That religious split largely follows geographic lines: The northern part of the country is predominantly Muslim, the eastern and southern parts of the country heavily Christian. The middle, sometimes called the “Middle Belt,” is ethnically and religiously diverse.

Not surprisingly, what makes Nigeria so dangerous for Christians originates in the Islamic north. There, Christians have been on the receiving end of a campaign Open Doors calls “religious cleansing,” that is, an attempt “to eradicate Christianity” from the region. . . .

In a statement released in late June, Christian leaders claimed that “over 6,000 persons—mostly children, women and the aged—have been maimed and killed in night raids by armed Fulani herdsmen.”

The Fulani are an ethnic group who are overwhelmingly Muslim, and their raids are not always at night.  . . .

The language used by Christian leaders in Nigeria in their statement to describe what is happening, “pure genocide,” is hard to disagree with. As was the call, directed toward the national government to “stop this senseless … blood shedding… and avoid a state of complete anarchy where the people are forced to defend themselves.” . . .

So, what can we do about this? First, we must pray, continually, for our brothers and sisters there. Second, we have to encourage the White House to continue pressing Nigeria about what’s happening in its Middle Belt, as it did during an April meeting with the Nigerian president.