Yesterday U.S. District Judge Kristine Baker allowed the Satanic Temple to intervene in a lawsuit over the state’s monument of the Ten Commandments on the Arkansas Capitol lawn.

In 2015 the Arkansas Legislature authorized the privately funded Ten Commandments monument that is identical to a monument the U.S. Supreme Court ruled constitutional in Texas a few years ago.

However, last June the American Humanist Association and the Freedom From Religion Foundation filed a lawsuit against the state to have the monument removed. Now the Satanic Temple will be part of that lawsuit as well.

Both the Satanic Temple and the Freedom From Religion Foundation have made headlines recently over their efforts to oppose Christmas celebrations and displays.

In Ohio the Freedom From Religion Foundation successfully bullied a town into removing a Ten Commandments monument and a Nativity scene from public property.

In the Illinois capitol rotunda the Satanic Temple installed a temporary “Snaketivity” display that features a human hand holding an apple with a snake coiled around it. Beneath the statue read the words, “Knowledge Is The Greatest Gift.”

As we have said before, city, county, and state officials are free to celebrate Christmas. Courts also have ruled that the government can recognize the significant impact of the Ten Commandments down through the years.

We need to understand and appreciate the significance of the Ten Commandments — including their impact on our system government and their relevance to us still today. Unfortunately some groups seem determined to erase anything that acknowledges that significance from the public sphere.

END_OF_DOCUMENT_TOKEN_TO_BE_REPLACED

The Satanic Temple is still drumming up controversy about Arkansas’ monument of the Ten Commandments.

END_OF_DOCUMENT_TOKEN_TO_BE_REPLACED 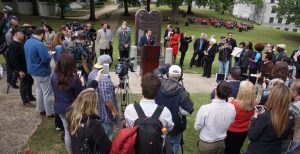 The Associated Press reports the Satanic Temple plans to join the ACLU in a lawsuit against the State of Arkansas over the new monument of the Ten Commandments on the Capitol lawn.

The monument is identical to one the U.S. Supreme Court ruled constitutional in Texas in 2005.

It’s worth mentioning that the monument installed yesterday actually is a replacement of one that was destroyed last year. You may recall a man plowed a car into the initial Ten Commandments monument less than 24 hours after it was placed on the Capitol lawn.

The ACLU and others who oppose the Ten Commandments monument were swift to issue public statements denouncing the destruction of that monument with a car, but they seem more than eager to try to destroy it with a lawsuit.