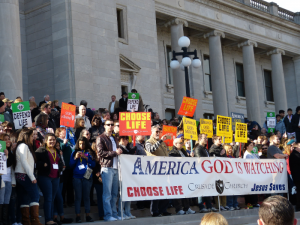 Our friends at the Colson Center for Christian Worldview released a commentary today about adoption and being pro-life.

[There’s] an argument we hear for abortion all the time: “Unless you’re willing to adopt every unwanted baby, you can’t deny women the right to choose.”

This usually comes from people who are unaware that Christians are more than twice as likely as the average American to adopt a child, according to a 2013 survey by Barna.

More importantly, you don’t have to personally take in every unwanted child to oppose killing them. Imagine someone using this excuse to justify killing unwanted toddlers! It doesn’t work, because a human life is a human life. Pro-lifers are consistent.

Many Christians who oppose abortion choose to adopt children, and many of those who cannot adopt for one reason or another still support adoption in other ways. That’s why in 1995 we worked closely with Sen. Fay Boozman to pass a law in Arkansas giving families tax breaks for adoption expenses. It’s a small step, but one that helps support adoption in Arkansas.