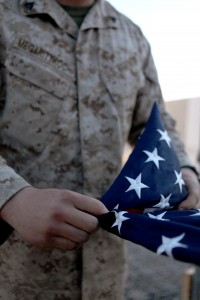 According to Fox News’ Todd Starnes, members of the U.S. military were told last week that the American Family Association is a “domestic hate group” because the group advocates traditional values and speaks out against homosexuality.

Starnes writes AFA was listed as a domestic hate group alongside the KKK, the Black Panthers, the Nation of Islam, and Neo-Nazis. Moreover, a photograph taken by a soldier with a camera phone shows the information slide on American Family Association contained a picture of Fred Phelps of Westboro Baptist Church in Kansas, despite the fact Phelps has no known ties to AFA.

“Let me be very clear. Your AFA does not condone the actions of Phelps and his followers, nor have we ever advocated hatred towards anyone, even those we don’t agree with.”

The American Family Association is well known for its American Family Radio programming, which consists largely of news and worship music. AFA lists some of its primary concerns on its website as:

Family Research Council in Washington, D.C., has written about the U.S. government’s actions against the American Family Association, saying,

U.S. Army troops were explicitly led to believe that the American Family Association (AFA) — a Christian ministry — was a “hate group” which soldiers should avoid at all costs. To make matters worse, in the presentation AFA was falsely associated with Rev. Fred Phelps of the Westboro Baptist Church, a group that causes great pain to families of fallen soldiers. Phelps was pictured holding a sign with a vile slogan alongside information on AFA — a classic propaganda technique. The message was clear: A Christian group that many soldiers go to for inspiration, education, and encouragement was to be avoided by U.S. military personnel.

Family Research Council has placed a petition online you can sign asking Defense Secretary Hagel to clarify our troops’s religious freedoms will be respected and they will not be further subjected to “harassment by left-wing anti-Christian training propaganda.” Click here to sign the petition.

American Family Association is asking people to write their members of Congress, and ask their elected officials to investigate, “why the Pentagon relies on the extreme left-wing Southern Poverty Law Center as its source for listing ‘hate groups.'” Click here to write your Congressman.

Actor John Rhys-Davies: Christianity “is Being Wiped Out” in Middle East