We decided to test that hypothesis by looking at the abortion and birth rates for Arkansas. The results are not as simple as Guttmacher would have us believe.

How Can You Tell People Are Switching from Abortion to Contraceptive?

There’s an easy way to tell if abortion’s decline is simply the result of increased contraceptive use: Compare the abortion rate with the birth rate.

If the abortion rate drops while the birth rate stays the same or drops, that demonstrates that people are simply choosing avoid pregnancy altogether rather than get pregnant and have an abortion.

If the abortion rate and the birth rate both rise, that would seem to indicate people aren’t using contraceptive.

If, however, the birth rate rises while the abortion rate falls, that would indicate people are choosing neither contraception nor abortion.

We crunched numbers for Arkansas obtained from the CDC and the Arkansas Department of Health’s office of Vital Statistics. Here is what we found. 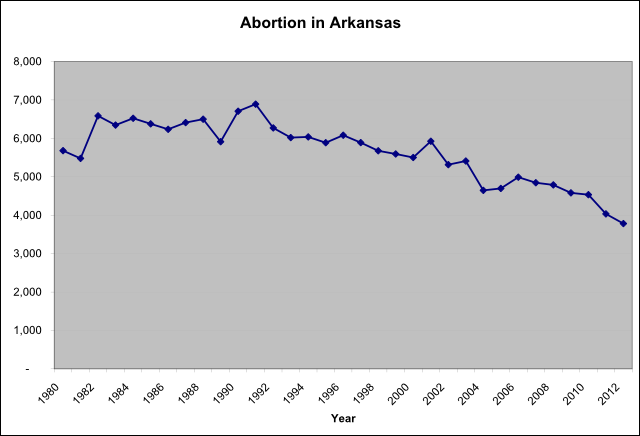 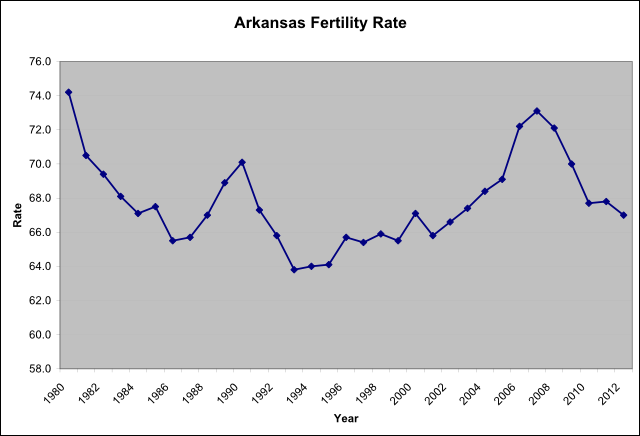 If you look at the “big picture,” a couple of trends do seem to emerge in Arkansas’ birth and abortion statistics.

First, both Arkansas’ abortion rate and Arkansas’ annual number of abortions have been on the decline since 1991. The numbers rise and fall a little from year to year, but if you chart it, abortion is declining.

Arkansas’ birth rate spiked significantly multiple times from 1991 to 2012. From 2001 to 2008, for instance, the birth rate in Arkansas climbed dramatically. If the decline in abortion were solely the result of people preventing pregnancy altogether through contraception, we wouldn’t expect to see such a drastic rise in births.

The Guttmacher Institute’s claim abortion has declined because people are preventing pregnancy hinges on the fact that from 2008 – 2011 the birth rate dropped. But look at the chart above. From 2004 – 2007, the birth rate in Arkansas rose dramatically before dropping from 2008 to 2012.

Does anyone really believe the birth rate began to rise in 2004 because of a contraceptive shortage? That’s what Guttmacher’s claim would seem to imply.

But Guttmacher also blames the economy, saying people chose to prevent pregnancy from 2008 to 2011 because they could not afford children. If that’s true, why did the birth rate remain low during the 1990’s–one of the most prosperous periods in American history? Why did it rise during the last half of George W. Bush’s presidency–when the economy was already struggling?

Things just don’t seem as simple as Guttmacher makes them out to be.

Officials from the Guttmacher Institute mention new abortion laws and clinic closures, but they are ignoring altogether another reason abortion might be on the decline: Changing attitudes.

Over the past two decades, attitudes toward abortion have shifted dramatically. More than ever, Americans identify themselves as pro-life, and if you check out the most recent polling, you see the average American does not believe in “abortion on demand and without apology.”

A lot of factors impact our birth rates–average age, public health, and, sure, the availability of contraceptives–but let’s not forget Americans’ attitudes.

I wouldn’t say an increasingly pro-life attitude is the only reason abortion is on the decline, but I certainly wouldn’t dismiss it altogether.