On Monday, President Donald J. Trump nominated Lee Rudofsky to serve as a federal judge for the United States District Court for the Eastern District of Arkansas.

Family Council President Jerry Cox released a statement saying, “We are very pleased with President Trump’s decision to nominate Lee Rudofsky. Mr. Rudofsky is highly qualified to serve as a federal judge. He is a graduate of Cornell University and Harvard Law School, and he has experience with constitutional law. As Solicitor General for the State of Arkansas, Mr. Rudofsky tirelessly defended state laws and policies in court—including policies that protect taxpayers from subsidizing abortionists like Planned Parenthood through Medicaid funding. While there were many other qualified candidates for the position, I am confident Mr. Rudofsky will do an excellent job serving on the federal bench, and I urge the United States Senate to confirm him.”

END_OF_DOCUMENT_TOKEN_TO_BE_REPLACED

Come to This Candidate Forum on August 13 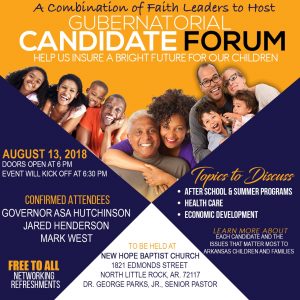 The following is a press release from a partnership of statewide faith leaders and community leaders.

LITTLE ROCK, ARKANSAS— All three candidates for Arkansas Governor have confirmed that they will attend a gubernatorial community forum in North Little Rock on Monday, August 13 at 6:30 p.m.

The forum, which will focus on issues important to families and the future of Arkansas children, is sponsored by a combination of statewide faith leaders in partnership with the Arkansas Out of School Network and other community groups.

“As faith leaders we feel it is important for us to come together and be advocates for our children and those who can not speak loudly for themselves due to lack of resources or lack of access”, explained New St. Hurricane Baptist Church Pastor Derick Easter of Pine Bluff.

The 90-minute forum, which will allow community members to become more informed about the candidates and their platforms, will be held at New Hope Baptist Church, 1821 Edmonds Street, beginning promptly at 6:30 p.m.  Doors for the event open at 6 p.m.  Incumbent and republican candidate Asa Hutchinson, democrat candidate Jared Henderson and libertarian candidate Mark West will discuss pre-established questions from topics such as afterschool and summer programming, health care and economic development.

“Afterschool and summer learning programs are a vital resource for families across Arkansas”, said AOSN Network Coordinator Laveta Wills-Hale. “They keep kids safe and healthy while preparing them for the future.”

Early voting begins October 22 for the gubernatorial election, which will be held on November 6.

END_OF_DOCUMENT_TOKEN_TO_BE_REPLACED 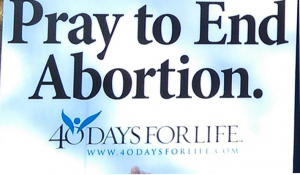 Family Council President Jerry Cox released a statement saying, “3,249 abortions were performed in Arkansas last year, slightly up from 2016 to 2017, but overall, the number has fallen by more than a thousand since 2014, and it is less than half of what it was in the early 1990’s. For two years in a row, abortion in Arkansas has remained at its lowest levels since 1977, and Arkansas is now the second most pro-life state in the U.S., according to Americans United for Life. Arkansans are winning the fight to protect unborn children.”

Cox credited a series of pro-life laws passed in recent years with much of the decline in abortion. “In 2015 Arkansas passed one of the best informed-consent laws in the nation. It ensures women are given all the facts about abortion up front, including information about abortion’s risks, consequences, and alternatives. According to state reports, over the past two years more than seven hundred women have chosen not to have abortions after being given that information. Last year the legislature improved this pro-life law and passed more than half a dozen others.”

Cox said abortion in Arkansas could decline even more in the future thanks to last week’s U.S. Supreme Court decision. “In 2017 921 drug-induced abortions were performed in Arkansas. Three years ago Arkansas passed a law requiring abortion facilities that do drug-induced abortions to contract with a physician who has admitting privileges at a hospital. Federal courts have upheld that law, and last week the U.S. Supreme Court chose not to hear a legal challenge against it. As a result, Planned Parenthood has chosen to stop doing drug-induced abortions in Arkansas for the time being. The Arkansas Legislature has passed good, pro-life laws. Attorney General Leslie Rutledge is defending those laws successfully in court, and the lives of unborn children are being saved as a result.”