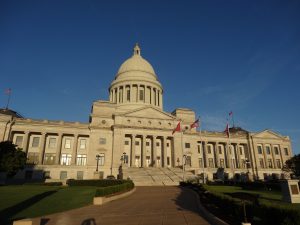 The ACLU, Planned Parenthood, and the Center for Reproductive Rights have challenged five good, pro-life laws the Arkansas Legislature recently passed and Governor Hutchinson signed into law. Now it appears our pro-life Attorney General will be very busy defending these laws in court. Below is Family Council’s response to the arguments these lawsuits raise.

The ACLU’s Argument: In its complaint, attorneys with the ACLU describe various abortion procedures besides the D&E procedure, but conclude that Act 45 effectively “imposes a criminal ban, and significant penalties, on second-trimester abortion practice.”

Family Council’s Response: The lawsuit identifies several other abortion procedures besides the D&E procedure, but tries to argue these procedures are either unsafe or difficult to perform. For example, the lawsuit argues that at least one method abortion doctors could use besides the D&E procedure “requires years of specialized training and hospital-grade equipment.” However, abortion proponents routinely argue that every abortion doctor undergoes specialized training before performing abortions and uses proper medical equipment to do so.

Act 733 prohibits abortions performed due to the baby’s sex. It contains a provision requiring the doctor to request the pregnant woman’s medical records pertaining to her pregnancy history before performing the abortion.

The ACLU’s Argument: The lawsuit actually argues that “there is no medical reason to obtain these records prior to providing an abortion.”

Family Council’s Response: This argument is almost unbelievable. Medical history and medical records are something practically every doctor wants when seeing a new patient. Act 733 simply requires the doctor to request the woman’s medical records related to her pregnancy history before performing an abortion; it does not even require the doctor obtain the records—simply request them.

Many Arkansans likely assume that abortion doctors already request a woman’s full medical records before performing an abortion, but this lawsuit indicates that is rarely the case. Courts have ruled time and again that abortion can be regulated to protect the life and safety of the pregnant woman. Even abortion proponents acknowledge that abortion—especially surgical abortion—is a major procedure that carries a number of risks and consequences. It is entirely reasonable to require a doctor to request at least some of a woman’s medical records before performing an abortion. That’s what Act 733 does.

The ACLU’s Argument: The lawsuit argues that “a 14-, 15-, or 16-year-old patient’s prior sexual intercourse does not indicate that she is a victim of Child Maltreatment, for example, if it occurred with her husband (16-year-olds may marry with parental consent) or with a similar age partner,” and it goes on to claim most girls under 17 who obtain an abortion are “typically young women who have engaged in consensual intercourse with a boyfriend who is close in age.”

Family Council’s Response: How can a doctor or nurse at an abortion clinic possibly know that a teenage girl was impregnated by her boyfriend and not by someone else? The lawsuit acknowledges elsewhere that women and girls who seek an abortion often have had no prior contact with the abortion provider and that the doctor does not request medical records before performing the abortion. If local police already have reason to believe the girl may be the victim of a crime, the reports filed under Act 1018 can confirm those suspicions or give authorities useful evidence.

Act 1018 does not prevent a girl from having an abortion; it simply requires abortion doctors to report abortion procedures performed on young girls—just in case the girl is the victim of a crime.

The ACLU’s Argument: This lawsuit essentially argues that Act 603 violates a woman’s right to privacy, is too burdensome, and requires “that [tissue from an abortion or miscarriage] be disposed of as if it were a deceased family member.”

Family Council’s Response: The Arkansas Final Disposition Rights Act of 2009 very thoroughly describes how human remains may be disposed of in Arkansas. It clearly defines human remains as “a dead body or fetus.” Arguably, this means that fetal remains—such as those from a miscarriage—should be disposed of according to the Final Disposition Rights Act of 2009. Act 603 simply clarifies that the same rules apply to aborted fetal remains as well.

Act 383 clarifies that abortion clinics will be inspected at least annually; that the inspections will be unannounced; and that any clinic that fails inspection will have its license to perform abortions suspended immediately.

The ACLU’s Argument: The lawsuit argues Act 383 is too broad and makes it possible for an abortion clinic to be closed for any infraction—including an infraction that is not related to healthcare. It also goes to great lengths to argue that if Arkansas’ last three abortion clinics close, there will be no abortion clinics left in Arkansas.

Family Council’s Response: Despite some of the arguments made in this lawsuit, the State of Arkansas is not obligated to ensure there are abortion clinics open for business in the state. It is, however, obligated to protect the public health and safety of Arkansans. That’s the purpose of Act 383. This law simply ensures abortion clinics are inspected; those that fail inspection will not be able to continue performing abortions.

Arguably, a clinic that failed inspection might still be able to provide other healthcare services—such as pregnancy testing or screenings for STDs. Act 383 simply requires the state to suspend a clinic’s license to perform abortions if the clinic fails inspection. It will be up to the Health Department to determine what constitutes failure of inspection according to Arkansas law and department rules and regulations.

Arkansas’ Abortion Rate Cut In Half Since 2001: CDC Report