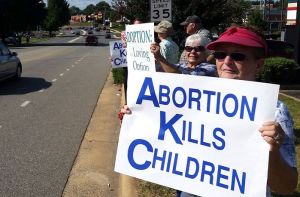 Yesterday Arkansas’ State Board of Health determined Planned Parenthood clinics in Little Rock and Fayetteville and a surgical abortion clinic in Little Rock all violated a state informed-consent law earlier this year.

At the time, Act 1086 arguably was the best informed-consent law in the nation. It made sure women inquiring about abortion received all the facts — including information about abortion’s consequences, risks, and alternatives.

Act 1086 also required abortion clinics to give women at least 48 hours to consider their options before having an abortion, and it prohibited abortionists from charging women for the abortion and any related procedures before the end of that 48-hour period.

These laws ensure women seeking an abortion have the right to change their minds during the 48-hour reflection period and that abortion facilities cannot make a woman feel financially obligated to go through with an abortion by charging her for everything upfront.

Most importantly, the state’s informed-consent law is saving lives.

Since 2015, more than 700 unborn children have been saved from abortion by this state law.

Giving women all the facts about abortion and its alternatives and providing them with enough time to consider their options empowers women to choose something besides abortion. Today more than 700 toddlers are alive in Arkansas because of Act 1086 and Act 383.

However, inspectors from the Arkansas Department of Health determined earlier this year that three abortion facilities violated provisions of Arkansas’ informed-consent law.

According to documents we obtained, on March 13, 2018, Planned Parenthood and Little Rock Family Planning Services received official statements from the Arkansas Department of Health citing the clinics for charging women for some of the procedures related to abortion — like the woman’s initial appointment at the abortion facility — before the end of the 48-hour reflection period.

The abortion facilities challenged the Health Department’s authority to cite the clinics. In their complaints filed with the State Board of Health, Planned Parenthood and Little Rock Family Planning Services argued that it is unconstitutional and unlawful to prohibit them from charging women before the end of the 48-hour reflection period. However, similar laws are on the books in Missouri.

After several months of procedural work, the State Board of Health declared this week that the Health Department was correct in issuing the Statement of Deficiencies against the abortion clinics, and that the clinics violated state law.

Aside from the fact that three abortion facilities were caught violating a very clear state law, all of this is significant in part because it could lead Arkansas to another big, pro-life victory in court. Planned Parenthood and Little Rock Family Planning Services have lost their fight with the State Board of Health. If they want to challenge the law now, they’ll have to take their case to court. Courts have generally upheld informed-consent laws like Arkansas’. If the abortion facilities decide to file a lawsuit to have part of Arkansas’ informed-consent law struck down, we could get yet another good, pro-life ruling.

Of course, if the abortion clinics decide not to challenge the law in court, that’s a victory as well, because that means the law will stay on the books and they will have to follow it.