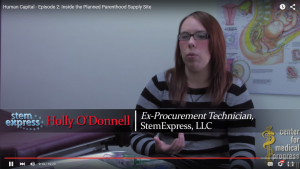 Two weeks ago the Center for Medical Progress released a video featuring Holly O’Donnell, a former tissue procurement technician who worked in Planned Parenthood clinics in California. The video is part of a series revealing how Planned Parenthood receives money for “donating” aborted fetal remains to researchers.

This week the Center for Medical Progress has released a new video in which O’Donnell describes how Planned Parenthood obtains aborted fetal tissue for researchers. In some cases, she says, the clinic at which she was assigned failed to obtain proper consent from the women.

“I was the only person who was a licensed safety P-1–licensed phlebotomy technician. Um, but the other individuals were drawing blood, um, in the clinics. The co-workers I had, um, they were just–they would not consent the donors. If there was a higher gestation, and the technicians needed it, there were times when they would just take what they wanted. And these mothers don’t know. There’s no way they would know.

There were times where–I remember one time was at the Fresno clinic–and that was the most high-volume clinic we had, lots of abortions, lots–and, um, I had a very gestated woman…so I consented her, and she said ‘No,’ and I’m fine with that…[My co-worker] took her into the room, and she came back out, and she was holding all these tubes, and all I said to her was, ‘What did you say to her to get that blood?’ And she was like, ‘Nothing.’ I’m like, so, basically, you just went in there, took her blood, and you’re going to be taking her fetus without her knowing…It’s terrifying.”

You can watch the video below.

What Do the Undercover Videos of Planned Parenthood Officials Tell Us?