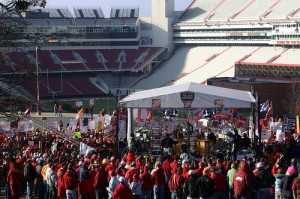 The Wisconsin-based Freedom From Religion Foundation is at it again in Arkansas–this time threatening legal action over prayer at a public high school football game in Ashdown.

The “Freedom from Religion Foundation” of Madison, Wisconsin, wrote to Ashdown School District Superintendent Jason Sanders recently, with complaints about the high school band director leading students in prayer, as well as, school-sponsored prayer at the football games.

Sanders consulted the “Alliance for Defending Freedom” for advice on the situation.

He says they haven’t broken any laws.

“We feel like that the freedom of our students to express themselves will hold up in a court of law,” said Sanders.

This isn’t the first time atheist groups have tried to use the threat of legal action to intimidate public officials and others.

It’s worth noting that across the board, groups like the Freedom From Religion Foundation tend to threaten lawsuits; oftentimes, if people stand their ground, no lawsuit is ever actually filed.

Photo Credit: “Gameday2” by Rmcclen at en.wikipedia – Transferred from en.wikipedia by Ronhjones. Licensed under Public domain via Wikimedia Commons.